This month’s Artist Spotlight brings us another fantastic artist as well as some beautifully sculpted (and painted) minis. This time, we had the wonderful opportunity to spend some time with our friends at NovaMinis. NovaMinis is a husband and wife duo that not only puts out some very interesting theme based Patreon releases, but does so with a focus on tabletop gaming and usability. Walt is another artist with a varied and unique background, and we really enjoyed getting to hear more about his work, his process, and how he wound up in our special little corner of the gaming world.

NovaMinis has a store right here on MiniHoarder, as well as a monthly subscription through Patreon that is well worth the value. 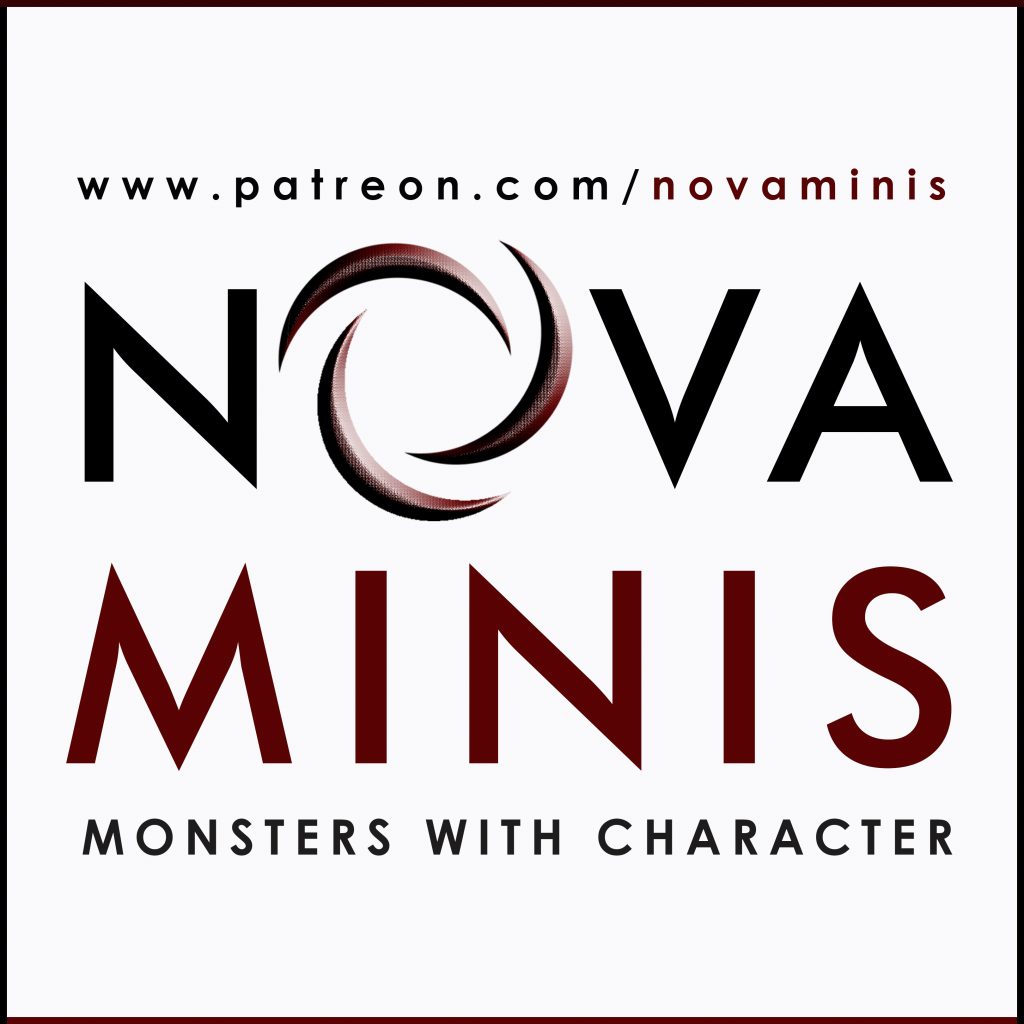 For every Artist Spotlight, we have one of the artist’s miniatures professionally painted by our friend Chris at The Spotted Painter. Walt chose his Orc Pirate Captain, and Chris went to town. Above are the final images. You can find more work by Walt on his store here.

MH: It’s been our tradition to kick things off by asking about the creator’s studio name, and we’re certainly not one’s to break with tradition. Can you tell us why you chose NovaMinis and what it means to you?

Walt: My wife, Katia, and I started a company a couple of years ago. After much thought, we chose the name Nova Mentis (Nova meaning new and Mentis meaning mind). We wanted a name that would reflect the beginnings of a new way, a new approach of thinking and working. It was only natural to continue with attaching the prefix “Nova” to all our projects, hence “NovaMinis”. Additionally, we  also liked the simplicity of the name and felt it carried the spirit of our intentions and work ethics.

MH: Before you jumped into sculpting, we have it on good authority that you spent some time writing for the video game industry. Can you give us a bit of that experience, and how you transitioned from that to sculpting?

Walt: Yes, that is correct, I worked as a video game journalist for a couple of decades. I was involved with some prominent publications and learned a lot as well as had a lot of fun in the process. I mean, who doesn’t want to play video games for a living! In 2009 Katia and I pooled our skills together and started our own video gaming and tech digi-magazine, called Gamecca. Sadly, after almost 10 years, we decided to retire the magazine in 2018 as the video game industry was changing, and we had to adapt. With this decision we decided to follow other passions…

Sculpture was always part of our lives. I was fortunate to meet my wife Katia in the National School of the Arts, where we both trained in fine arts. I have sculpted on and off over the years but in around 2016 I started dabbling with 3D sculpting software. It started evolving into mini sculpts (something that I was keen on even as a kid, back in the early ‘80s) and so we started exploring online options. 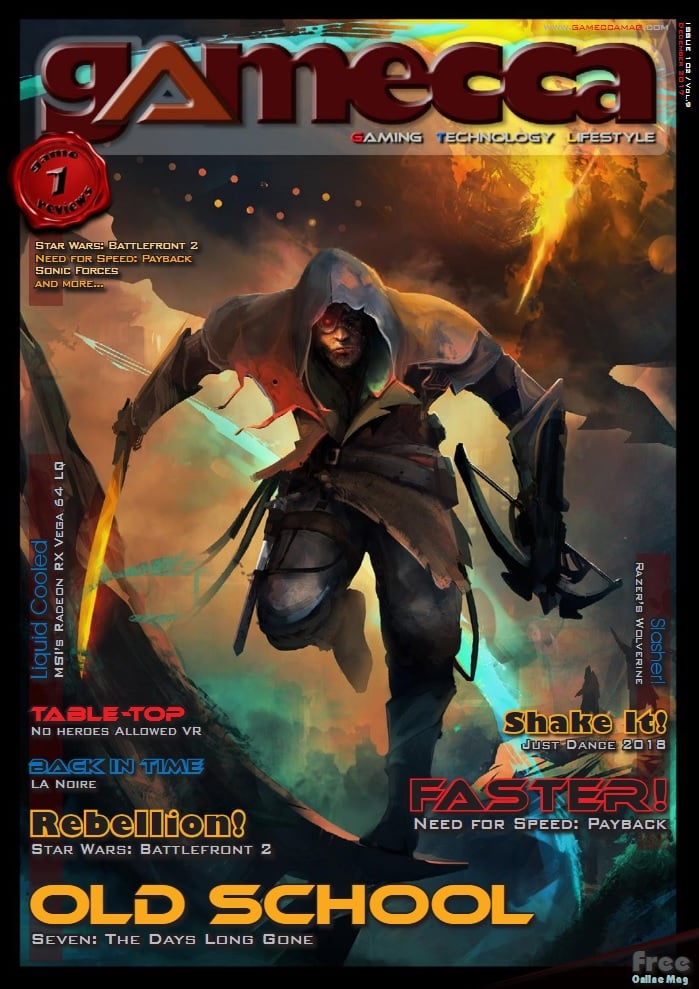 MH: Your sculpts definitely have a certain feel and aesthetic to them. How has your style evolved and changed over the past year or so, and what would you say are your hallmarks?

Walt: In terms of evolution, I think that the minis have become far more expressive. We’ve been putting a lot of work into posing and expression, as well as into the humor that sometimes makes its way into our minis.

As far as hallmarks go, I think I would definitely define what we create as… versatile. When it comes to designing a mini, becoming very specific with that mini doesn’t really work for me; personally I feel that any particular mini needs to be able to fill a number of roles for it to be truly useful to a gaming group. There are some that are more specific than others, of course, but some degree of adaptability is very important. I believe it also comes into play when you look at how the minis interact with other items on the table-top. They need to be able to ‘fit in’ with whatever else is happening on the table, and to that end we try and fit into a style that blends well with other products that are out there.

MH: There are a ton of artists doing sculpts now. How have you adjusted your style and content to stand out among some of the others?

Walt: Yes, there are a great many amazing artists out there. We have chosen to focus on the table-top. While some folks have sized some of our minis up and painted some of them as display pieces, we are about gaming minis, primarily, and while our intention is always to create something that works in a 28mm or 32mm environment.

We have also chosen to look at strong themes and ideas for each release. I like to think of each release as a play-set… whenever possible, the elements all need to work together, and hopefully inspire great stories for those that use them. Those packs form part of larger themes, too, some of which have more defined ideas, and others being a bit looser… ultimately, it’s a world that we are crafting, and those themes and pack ideas all tie into it.

Lastly, maybe most importantly, is the idea of print-in-place objects. When I first started designing for print, I did what I tend to do with new projects…  jump and build my wings on the way down. When I first started printing with my trusty Elegoo Mars (which is still churning out test prints) I wanted to see what parts could be made movable. I knew that some folks were doing it with FDM, but I wanted those results in resin. It took a hell of a lot of trial and error, but we got there eventually. Being new to the industry, I believed that this was more common, but  I was quite surprised to find that it is not. We like to strive to have at least one print-in-place piece in every pack, even if it is just something simple. But I really enjoy the more complex pieces, like the cages and wagons, because they add a fun logical challenge to the creation process for me.

MH: I have to say, your latest set was reeeeeally impressive. Especially the ship! We can’t wait to print that beast out. You also have several characters that really caught our eye. Can you tell us a bit about the set, and about the captain in general?

Walt: Thank you! That ship was a great challenge for me, being the biggest piece we’ve released to date. And it needed things that open and close and swing and wobble (because that’s how we roll, right?), so there was a lot of tinkering that went into it.

As for the captain, well… there’s a bit of a process to this, so bear with me!

The first decision was to make the ship which, because we like to present the themed packs, needed a crew. And because we do monsters exclusively (except for the odd slave here and there so far) the crew needed to be some kind of creature. I think orcs were the obvious choice here.

So we set about designing them and decided that we needed options for people who do, and do not, use black powder in their campaigns. Because versatility…

While researching various cannons and flintlock pistols, I started looking at the dress from the high age of piracy…. Tri-corn hats, long coats, that sort of thing. The idea of orcs wearing tri-corn hats was great, and I kind of ran with a very traditional pirate wardrobe for the orcs.

The captain was the last design, and he needed his long coat, epaulettes, hat and beard to really be worthy of the title. He’s around ten percent bigger, too…

We tend towards an organic fluidity when we put together our packs, and that really was the case here. While there are plenty of ideas and concepts at the outset of our design phase, nothing is set in stone; the original ideas were quite different from our final product with this set, and the captain is a good example of that process.

MH: It’s been a huge privilege of ours to know you since you started, and the progress you have made over the past year has wonderful to see. Any tips, tricks, or general advice you have for other artists who are just getting started with trying to sculpt 3D printable models?

Walt: Quite simply, do your research and don’t let anyone tell you what can and cannot be done. Be prepared to try and retry ideas often, and always put in the effort to tweak a good idea into a workable form, rather than getting disheartened.

If you have a good understanding of the tools and techniques involved, along with imagination and ambition, you will get some pretty incredible results.

MH: If you could only listen to three bands for the rest of your life, who would they be, and why?

Walt: When I first read this question I though “only three?” but then I realized that, yeah, I could do that.

The first would be Tool, because they never cease to amaze me with their complexity and excellent musicianship.

The second – still sticking with the prog thing – would be Porcupine Tree. Once again, this band is thrilling to me, because they push boundaries and do things that are normally not done, particularly in their last few albums… I wish they would reform!

Lastly, Pink Floyd (before Roger Waters left…) Part nostalgia and part emotion here. Pink Floyd has always been a band capable of moving me. And their guitar work is simply sublime! If it isn’t cheating, I would include some of Roger Waters’ solo stuff, but that might be pushing my luck, right?

As always, we really enjoyed the opportunity to sit down with an artist and hear more of the story that inspires their work and how they got where they are. We really appreciate Walt taking the time to answer our questions and share his experiences with us. If you have any questions you’d like to ask NovaMinis, feel free to let them know in the comments below!

We’d also like to give a huge thanks to Chris Spotts for doing such a fantastic job on painting the Orc Pirate Captain. Chris is the painter behind The Spotted Painter, and runs a YouTube channel and can be found via his FaceBook page.

If you’re an artist and would like to be featured in our Artist Spotlight, give us a shout at hoarderhelp@minihoarder.com.